On the 15th and 16th of this month, the annual W&DW congress took place in the amazing city of Venice, without a doubt it was an unprecedented summit of creators. There, the election of a new W&DW President took place – DAC’s General Secretary Horacio Maldonado, as well as a new Executive Committee.

As every year, the W&DW congress gathers literary and audiovisual dramatic authors who represent their nucleated societies in CISAC – International Confederation of Societies of Authors Interpreters – united by the same common cause: The defense of the authors rights around the world. In this annual Congress, elections were held for President, Vice President and Executive Committee. The new President of the creators board W&DW is DAC’s General Secretary, screenwriter and film director, Horacio Maldonado, who is also General Coordinator of ADAL – Alliance of Latin American Audiovisual Directors – which has previously served as vice president of the W&DW board and consolidated member of your executive committee.

“I am honored to accept this position and it is a pleasure to have such a strong executive committee that can support our work over the next few years.” said Horacio Maldonado, president of Writers & Directors Worldwide. 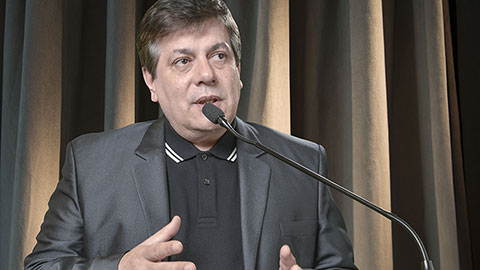 “Our goal is to continue building societies in Africa and Asia, while maintaining in Europe and Latin America, the pressure on lawmakers, in order to protect the rights of audiovisual authors.” Horacio Maldonado

The French scriptwriter and author, Yves Nilly, was elected as vice president, following his two terms mandate as the organization’s leader.

During the Venice Congress, the executive committee composed of the following nine people was also elected (in alphabetical order):

Two days were held with a copious participation of creators from the 5 continents together with their legal advisers specialized in authors rights. Together, they covered extensively issues of territory, repertoire and several other issues with which the creators must deal with day by day. It was of greater importance to count for the second time with the societies of Sudafrika (FEPACI – Pan African Federation of Filmakers) represented by its General Secretary Cheick Oumar Sissoko and India (SRAI – Screenwriters Rights Association of India) represented by its General Secretary Vinod Ranganathan.

Among the items on the agenda, we found panels that examined the effect on the authors of the current lack of balance in the international compensation policy and a debate on how the border approach of large digital distributors is affecting the local production of films and changing the way in which national authors ‘societies respond to issues about authors’ rights. There was also a lively review of the changing role of film, TV, drama genre and documentary filmmakers, which was attended by the CISAC Vice President and Director, Marcelo Piñeyro.

The congress received updates on two film restoration projects: one in Argentina, designed to revitalize the appeal of classical cinema and presented by Horacio Maldonado, and the other an African restoration project by UNESCO / Martin Scorsese, presented by Cheick Oumar Sissoko , General Secretary of FEPACI. The final presentation was in charge of the renowned writer and actor Harry Shearer, preparing a summary of the “Fairness Rocks” campaign, belonging to the iconic 1984 film “This is Spinal Tap” by which the original authors never received fair compensation for his participation in the success of the film.